Give up The Ghost by Angie Fox

Give up the Ghost is book number eleven in the Southern Ghost Hunter series by Angie Fox. This story continues where book ten left off, with a time vault in town opened, and all the items in need of documentation. The town watches as the items are pulled from the vault. A mysterious book that was not supposed to be in the vault is found, and it causes quite a stir.

This book is the center of the mystery in this story. It takes Verity Long on a hunt for an elusive ghost, and a possible solution to Frankie’s predicament of being grounded on Verity’s property. Like the other books in the Southern Ghost Hunter series, Give Up The Ghost is filled with a cast of eclectic and fun characters, her dreamy boyfriend Ellis, and the cutest pet ever. We also learn more about Virginia’s past, and it’s not pretty. As book eleven comes to a close, I wonder if it’s possible that Virginia and Verity might someday have a civil relationship. I hope so. 333 As for her ghost, Frankie, it feels like two steps forward and one step back on his journey to freedom. He’s stubborn and resists change, even when it’s detrimental. He makes me laugh, but sometimes I also want to clobber him.

If you’ve read the other books in the Southern Ghost Hunter series, then you will surely enjoy this one. If you have just spotted this series for the first time, then I highly recommend that you go back and start from the beginning and read your way through, because you won’t want to miss them. These are supernatural cozy mysteries at their best. Angie Fox has a great sense of humor and adds just enough snark to make me laugh out loud from time to time. The main character, Verity Long, is southern to the core. She’s smart, upbeat, considerate, and she sticks her nose in places she shouldn’t all for the greater good of the town she loves, and the people (both alive and dead) who need her help. Highly recommended! 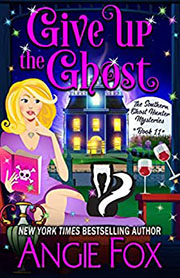