Jeremy Logan is back in Chrysalis, the sixth book in the long-running series featuring the intriguing enigmalogist, that began back in 2007 with the novel, Deep Storm. This time, Logan is called to the Chrysalis Advanced Research Center, a high-tech campus hidden away in a remote corner of the Berkshires. Something is very wrong at the facility, which produces a high-tech virtual reality device known as Omega, which has all but become ubiquitous with millions around the world relying on the futuristic gadget.

But things are not all they seem Chrysalis. People associated with the company are dying, and even though there appears to be no common denominator between the tragedies, Logan is suspicious. Because Chrysalis is in the midst of launching the next generation of virtual-reality devices. Could there be a connection between the deaths and the fancy new VR interfaces?

In his new novel, Chrysalis, Lincoln Child deviates from the supernatural roots of the Jeremy Logan series and veers squarely into the dangers of the modern high-tech world, where everyone is linked to everyone else. Could one bad actor manipulate these global connections for their own nefarious purposes?

I have enjoyed the other five books in the series, and this new installment is a welcome addition. My only slight disappointment was that I felt it strayed a little from Logan’s supernatural roots. That said, the novel barreled along at a fast pace and held my interest throughout. Logan is an interesting character who reminds me a little of a less serious Robert Langdon. I hope we will see Logan again in the near future, continuing his supernatural journey.

In the meantime, if you haven’t read the other books in the Jeremy Logan series, consider giving them a go before you arrive at Chrysalis. If you have devoured them already, you will enjoy spending some more time with the famed enigmalogist and getting to know him just a little better.

All in all, a solid entry in the series which I hope will continue for many more books. 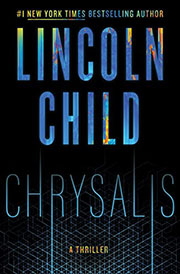