I’ve been reading Preston & Child for over twenty years. The first book of theirs I ever opened was Reliquary—Yes, I started with book two of the Pendergast series—which I picked up in the UK from a bookstore in the departure lounge at Gatwick Airport. The year was 1998 when horror novels were still called horror novels instead of thrillers, and e-books were more than a decade away. I spent the first several hours of my flight to Orlando, Florida, reading that paperback and then went to Barnes and Noble after arriving in the USA to buy a copy of Relic. In the years since, I’ve read most of the Pendergast novels, along with the author duo’s other creations featuring Gideon Crew and Nora Kelly. During that time, the Pendergast novels have gone back and forth from something more akin to a traditional crime thriller all the way across the spectrum to monster fiction, but none have embraced the B-movie creature horror genre like their latest novel, Bloodless.

What starts out as a mystery revolving around DB Cooper, the famous hijacker of Northwest Orient Airlines flight 305 in 1971, soon becomes something more. Bodies are tuning up on Savannah. Bodies drained of blood. This stirs speculation that a vampire is on the loose, a rumor hyped for their own ends by a film crew shooting a supernatural reality TV show. But as the bodies mount, and the film crew end up on the wrong side of the real perpetrator, the book becomes an apocalyptic monster story. I won’t give away the details but suffice to say that Preston and Child dive into the monster premise feet first. There is no ambiguity here. They wanted to write a schlocky monster tale and they obviously had fun doing so.

How have fans of the reserved and enigmatic Pendergast character rated this all-out abandonment of subtlety? They don’t like it quite as much as other books in the series, if you go by the Amazon reviews. The first 19 books in the series (as March 11, 2022) all rate between 4.5 and 4.8. Bloodless comes in a little lower at 4.4. Now, that could also be the slight cliffhanger of an ending (readers dislike cliffhangers as I found out myself with the latest John Decker book), but I think that maybe—just maybe—the antagonist might be to blame. Pendergast novels, even the more supernatural ones, have always tended toward the understated, and Bloodless, at least the last third, is anything but. It definitely veered into Godzilla style territory. Scrap that. It reminded me of an early eighties cult classic horror movie called Q, The Winged Serpent that starred Michael Moriarty and David Carradine. I have to wonder if the authors saw this cinematic fast-food meal of a movie? On a side note, I still can’t look at the Chrysler Building in New York City without thinking of a winged Aztec dragon creature nesting on top. So after all that, what did I think of it?

Honestly, I enjoyed the book. I like monsters. I like them even more when they are on a rampage. And I even liked the cliffhanger. I’m wondering how they will handle that in the next book, or if there is a new spinoff series coming our way. Regardless, I personally give it a firm 4.8, up there with the best of them. And to Preston and Child I say, don’t make us wait to long for the next installment, gentlemen! 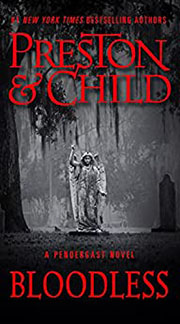